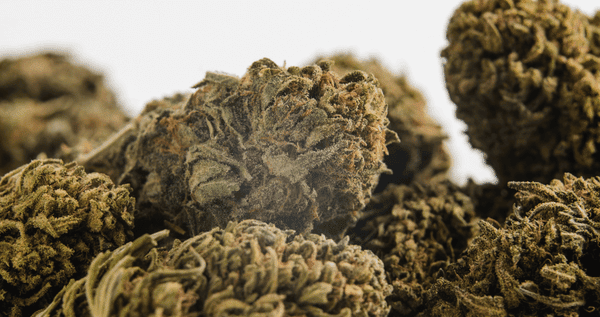 Since cannabis entered the mainstream, many breeders started naming their strains. Over the years, those names became part of the strain’s identity.

Trainwreck, Gorilla Glue, and Girl Scout Cookies are just some examples of weed strain names; funny, right? But why do people always call their weed by funny strain names? We’ll answer that question and rank some of our favorite funny weed strain names.

Why do some strains have funny names?

The main reason breeders started cooking up playful and funny weed strain names is simple: it’s a marketing tactic. That’s not to say it’s wrong to have a good and simple name for a strain. But having a whimsical and wacky name does make a difference. When you’re given the choice of trying out a new cultivar you don’t know, would you pick the one with a simple name? Or the one that made you chuckle?

Breeders want to leave a lasting impression on the consumers, so we have strains like Cat Piss. This wasn’t always the case. Back then, different strains didn’t have the branding they do now. It was all the same, and it showed. They were simply packaged into bricks. Nowadays, cannabis buds are stored in resealable bags or tin containers that also display their strain names.

How does a cannabis strain get its name?

The naming convention for cannabis didn’t start off as a marketing tactic. Most strains were named for what they were. Their aroma, flavor, and effects were what composed a strain’s name. But, some strains were named after iconic people and honored them somehow. A great example would be Jack Herer. Like the person it was named after, this strain is known for its energizing effects.

Another strain with a funny, original name is Fryday Kush. This strain was announced by Ice Cube, an iconic character in the 1995 movie ‘Friday.’ Likely, this is where the rapper got the name for his line of marijuana. Before we get into the list, here are some strains that didn’t make the list; Candy Kush, LSD, and Purple Haze. These three strains and Fryday Kush are just some of the funny weed strain names waiting to be noticed.

6 of the funniest cannabis strain names (you can grow)

Despite what its name lets on, Green Crack is 100% marijuana. Unfortunately, that’s the only clear thing about this particular cannabis strain. Its name is something that the community often debates. The issue is: Green Crack is also called Green Cush, and many people argue about which name came first. Some say it was originally Green Crack but was changed to Cush to make it more marketable. Others say it was Cush, but it was nicknamed Green Crack by Snoop Dogg.

The rapper was right to call it Green Crack since it does pack a punch. With one toke, Green Crack will have you wired with its strong yet euphoric head high. When it comes to growing this strain, it’s easy for anyone starting off. Do be warned, though; Green Crack seeds produce tall plants.

This indica-dominant strain got its name because of its flavor. While it’s not exactly sweet, it has an earthy undertone and a minty chocolate finish. The taste of its smoke reminds many of thin mints, a popular variety of Girl Scout cookies. But this is not to say that the only thing GSC has going for it is its flavor.

Don’t let its name fool you; this strain packs a punch. It combines Durban Poison with OG Kush, two very potent cannabis strains. It will hit you with a strong sense of euphoria that’s followed up by an equally strong body high. We took the strain even further with our Girl Scout Cookies Extreme. It is a much easier strain to grow and carries the same potent effects and delectable flavor.

The name of this strain fits its effects. It’s like a roller coaster of euphoria and relaxation that you rarely experience in life. And for those uninitiated, the experience will hardly be very gentle. As for how this particular weed strain got its name, it’s not pleasant either. Purportedly, the strain was grown on a hill the same summer a train crashed in the Humboldt region. But others claim that Trainwreck got its name because of how it slams your head with an energizing buzz.

When it comes to growing Trainwreck plants, they’re fairly easy to maintain. They don’t require much, just frequent trimming to keep them from spreading too wide. It’s another strain known for its tall plants, so be sure to have enough vertical space.

Gorilla Glue, or GG4, got its name from its extreme stickiness. This hybrid strain produces highly resinous and potent buds. It has a strong sedative quality that will leave you feeling deeply relaxed. All while your mind fills with euphoria. The strong combination of head and body high made Gorilla Glue famous for leaving many consumers couch-locked.

Tending to Gorilla Glue plants is also a rather relaxing experience. It can be enjoyed by both new and experienced growers, but once again, plan for tall marijuana plants.

Blue Balls was made by crossbreeding Chemdawg and Blueberry.

This is where it gets the ‘Blue’ part of its name (the ‘Balls’ part, though, who knows?)

This strain doles out a combination of both parents’ effects, with the sedative qualities of Blueberry and the head high of Chemdawg.

While you won’t find any Blue Balls in our store, you can find both Chemdawg and Blueberry. They’re both amazing strains with equally amazing buds. And if you want, you can crossbreed the two strains to make your own Blue Balls.

Cat Piss is a sativa dominant strain that got its name because of its pungent flowers that reek of cat piss. Due to its odorous buds, you’ll either love or hate it. It’s definitely an acquired taste. As for how this strain came to be, It is a cross of Super Silver Haze. You can get creative and see if you can make your own Cat Piss by growing Super Silver Haze and crossing it with random strains.

When it comes to smoking Cat Piss, you’ll find that it offers the same effects as Super Silver Haze. It has a mellow cerebral buzz that’ll fill your mind with euphoria. One surprising effect of Cat Piss is that it stirs your appetite, so be sure to have a lot of food on hand.

A strain’s name is just part of the experience. Whether you purchase or grow your own, set yourself up for a good time by smoking a strain with an entertaining name. Grow your own weed by purchasing cannabis seeds at ILGM.com

Why do marijuana strains have funny names?

Originally,  names were meant to showcase what a strain has to offer. Nowadays, it’s more about marketing and leaving an impression. That’s not to say a lot of strains all have funny names. Some are simply a description of where they are from, like Afghan.

What are the most famous “funny” weed strain names?

0 comments on “Funniest Weed Strains of All Time”