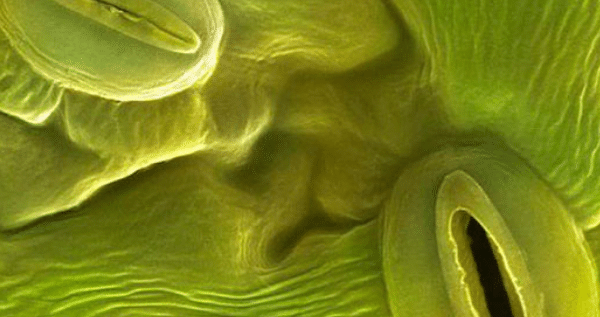 The leaves of marijuana plants are covered with stomata.

These stomata are only found on the underside of the leaf and aren’t visible to the naked eye.

They let CO2 in and let oxygen and water out.

The plant has a very sophisticated system to open and close its stomata.

Understanding the functions of Cannabis Stomata:

It has to, because the life of the plant depends on it.

Your climate management indirectly influences the position of the stomata.

In order to grow high quality marijuana it’s important to understand how a marijuana plant works.

Stomata form the gates to the leaves. Carbon dioxide goes in, oxygen and water go out.

In principle, the stomata have to be opened as much as possible to let CO2 in, which is needed for photosynthesis.

At the same time, they have to be closed as much as possible to prevent the loss of liquids.

These two desires obviously don’t go together. The plant is therefore always looking for a balance between loss of liquids and absorption of CO2.

This balance continuously changes and depends on the condition of the plant and the climate.

You can use the climate to influence the regulation of the stomata.

A stoma is a microscopically small opening in the leaf.

This is surrounded by two guard cells and a number of assisting cells.

The guard cells can rapidly change shape to open or close the gate.

Stomata can be compared to hydraulically driven valves.

They open and close because the guard cells take up or release water.

They do this through osmosis, which means that a liquid with a higher concentration of dissolved substances attracts water through a membrane.

A guard cell has to therefore generate a high concentration to be able to attract water.

It mainly uses potassium and sugars to do this.

The cell has special little channels, enabling it to attract potassium from the assisting cells.

It can remove potassium from the cell through other channels.

The former process is faster than the latter. That’s why the plant can open its stomata faster than it can close them.

The signal to close comes from the plant hormone abscisic acid, which is formed in the roots and the leaves in case of water stress.

Stomata are a sort of gate without gatekeeper.

Not only CO2, oxygen and water pass through, but also harmful substances such as ethylene and carbon monoxide.

The plant didn’t develop a way to keep these out.

Stomata have their own day and night cycle.

They’re closed at night, and open during the day.

They also react to changes in the climate. The following factors affect the stomata:

Recent research indicates that the functioning of stomata can’t be contributed to a simple reaction or just a single factor.

The opening and closing of stomata is a system with a lot of securities built in.

That is not surprising, because the plant could die if something would go wrong.

Researchers compare the control mechanism of the stomata with a network in which other components can take over a lost function.

It turns out that the hormone abscisic acid can regulate the concentration of ions in the guard cells through different paths.

If one paths is closed for some reason, another path is used.

The opening of the stomata depends on the light intensity. In principle, more light means a bigger opening.

But the guard cells don’t ‘see’ how light it is; they react indirectly.

The assimilation is higher at more light, so the concentration of CO2 in the leaf decreases, because it’s being used.

This is the signal for the guard cells to open the gates to let more outside CO2 in.

The plant tries to maintain a fixed ratio between external and internal CO2. but a very high CO2 concentration in the air leads to partial closure.

This is not a very adequate response. The temperature of the leaves gets too high, which leads to yellowing of the leaves.

Cooling (with moving air) can help to prevent this. Marijuana can handle up to 1500 ppm without much closure.

It turns out that the color of light influences the behavior of the stomata. Blue light is more effective than red.

The stomata will open further.

You would think this fact can be exploited by applying more blue light in the spectrum, for instance by colored LED lights, to directly influence the operation of the stomata.

This would however be very unwise. The plant has a very sophisticated system to optimize the balance between the intake of CO2 and water loss.

Not much can be improved about this, so HPI and HPS lamps are currently the best lights for indoor growers.

The plant doesn’t react to the humidity in the growing room directly, but it reacts to its own internal moisture situation.

This situation is the result of the interplay between humidity, evaporation and water absorption.

It’s quite logical that the plant closes its stomata when it doesn’t get enough water, no matter how much that sucks for photosynthesis (since CO2 is no longer taken in).

In extremely stressful conditions, closing the stomata is a lifesaving action. This however creates a different problem.

Closing the stomata increases the temperature of the leaves, in turn stimulating the evaporation (even with closed stomata, the leaf isn’t completely vapor tight), causing even more water stress.

Furthermore, the humidity of the air in the growing room decreases when the evaporation of the plants is slowed down.

So there’s a bigger difference between the humidity in the area and the internal moisture situation in the plant, again stimulating evaporation.

Eventually, closing the stomata has a much smaller effect on the evaporation than you would initially expect.

It’s interesting to know that stomata have to learn to react to the moisture situation.

Recent research at the University of Wageningen in the Netherlands showed that there is no need to close the stomata to limit loss of moisture when plants are cultivated under a constant high humidity.

But they also won’t learn to close them, causing them to no longer react well under certain stressful circumstances.

0 comments on “How do Stomata of a Marijuana leaf function?”