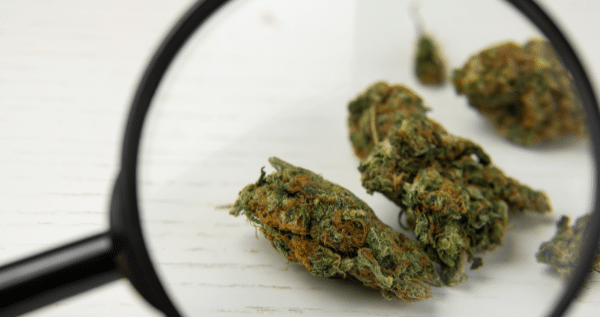 However, some find the effect to be a bit of an inconvenience, so it’s a good idea to know which strains cause this reaction before you partake. Are you ready to learn?

Below we share the best couch lock strains – all at various potencies – for you to grow at home.

Five Of The Best Couch Lock Strains To Grow

Blueberry is an indica dominant hybrid strain that lives up to its name. Its deep purple buds resemble blueberries’ color and have a sweet aroma and taste.

Blueberry’s sweet flavor isn’t the same fruity sweetness you get from other strains like Runtz and Zkittlez, which have a mix of different fruits. Instead, this weed strain provides a single note, the fresh flavor of ripe blueberries.

This couch lock weed has a deeply relaxing body high that you would expect from an indica, but because it’s a hybrid strain, it has a full head high as well.

However, unlike its flavor, the effects of Blueberry aren’t just a single note.

Instead, its head high also includes mood-elevating qualities that you’d typically get from sativa strains. It will draw out euphoric feelings as you relax.

This unique blend is why Blueberry’s won the High Times cannabis cup for the best indica.

When it comes to growing Blueberry in your cannabis garden, be aware that this strain doesn’t just grow tall but also wide.

You’ll need a lot of space between each plant.

As for where they’re best grown, keep them indoors. Blueberry cannabis plants can thrive outdoors in a sunny climate.

Our online cannabis seed shop sells both feminized and autoflower seeds, but you can also purchase Blueberry CBD seeds. These marijuana seeds also contain high amounts of CBD and barely any THC.

When talking about couch lock strains, Afghan will always come to mind. This pure indica comes from a landrace strain in the Hindu Kush Mountains (around the Pakistan-Afghanistan border).

This couch lock weed has stayed relevant throughout the years because of its strong effects and history.

And even to this day, Afghan and its landrace parent Afghani are still cultivated for their potent buds and their rich resin content that is perfect for hash.

The strong and potent buds of Afghan are why this particular weed strain often comes up when talking about potent cannabis strains or the best couch lock strains.

Afghan provides a deeply relaxing experience and a full-body high. Additionally, it cultivates happiness as feelings of euphoria begin to fill your mind.

Afghan is a very potent indica strain for first-time users that will surely knock you out.

However, for those who regularly consume indica, you’ll find Afghan’s strong body high to be a pleasant experience.

Growing this couch lock weed strain in your cannabis garden won’t require much space since Afghan seeds will only grow to be average-sized cannabis plants.

However, they’re known to grow quite bushy, so you’ll need to prune them accordingly to avoid crowding.

Just like with Afghan, you can’t make a list of the best couch lock strains without mentioning Gorilla Glue. This hybrid strain is a 50% sativa/ 50% indica blend.

However, despite this, Gorilla Glue’s effects are primarily indica. And it’s because of its potent sedating qualities that this couch lock weed strain is one of the best end-of-day strains around.

Gorilla Glue’s potent buds will give you a deeply relaxing body high that will make you feel heavy like a gorilla. And, true to its name, you’ll feel glued to your couch.

Looking for the best strains for socializing. This article includes a list of our favorites, as well as some advice on how to best enjoy them.

Say goodbye to any of the leftover work you put off, as the heavy euphoria that you’ll begin to feel will make you unable to do any of it.

For this reason, we highly advise that you don’t smoke Gorilla Glue buds during the day since it’ll leave you knocked out for the entirety of it.

Outside of its sedating qualities and the euphoric sensations you’ll feel, Gorilla Glue will also stimulate your appetite and elevate your mood (if its soothing effects don’t hit you so hard that you can’t feel them).

We sell Gorilla Glue seeds in both feminized and autoflowering seeds; however, regardless of your choice, Gorilla Glue is one of the most straightforward strains to grow.

We highly recommend beginners try it for themselves.

Northern Lights is another popular indica dominant hybrid strain. This strain’s fame came from its long-lasting highs and pleasant effects.

As its name suggests, this couch lock strain produces flowers that are a mix of purple and green (as well as other colors).

Although its sedating qualities are as potent as you would expect an indica dominant strain would be, it also has a satisfying head high that fills your mind with euphoria, elevating your mood with feelings of happiness and joy.

All the while, its potent body high helps you unwind after a hard day’s work, but not enough that it’ll leave you glued to your couch like other more potent strains such as Gorilla Glue and Purple Kush.

Overall, if you want a satisfying yet not too potent experience, Northern Lights is the ideal strain.

This marijuana strain is not only easy to grow, but it’s also pleasantly deceptive. It’s a fairly short plant that won’t grow taller than 2-3ft and can surprisingly produce a maximum of 18 ounces per plant.

When it comes to strains that deliver a heavy body high that will surely put you out of commission for the day, LSD has no contender.

With a THC content of up to 24%, this strain isn’t for beginners. This indica dominant hybrid (55% indica and 45% sativa) offers a heavy-handed body high that will make you sit down and stay in place.

The deeply relaxing feeling you get with this couch lock strain will soon mix with feelings of euphoria. So although you’ll be glued to your couch, you’re at least left with an intense feeling of happiness along with other stimulating sensations.

These include, of course, an increase in appetite, so having snacks on hand beforehand is ideal.

When it comes to growing, this couch lock strain makes things easy. The cannabis plants from LSD are fairly short and compact.

Additionally, the feminized seeds have a flowering period of 8 weeks with an estimated harvest of around 14 to 17 ounces per 9 feet squared.

Lastly, this particular couch lock strain is highly resistant to many common marijuana diseases, which is why it’s easy to grow even for beginners.

When choosing the best couch lock strains to grow, it’s essential to consider what type of high suits you best. Not everyone appreciates a potent body high, such as the likes of LSD and Gorilla Glue.

If you’re looking for a moderate yet deeply relaxing experience, then Northern Lights and Blueberry are probably going to be the couch lock strains for you.

You can grow all of the strains on this list and other potent strains like Durban Poison and Jack Herer by visiting ILGM.com.

Myrcene. Besides being a flavonoid that gives certain marijuana strains a sweet flavor profile and an earthy taste, Myrcene increases blood-barrier penetration. Essentially, Myrcene increases the potency of a strain’s effect, creating the heavy feeling we associate with ‘couch lock.’

What are the most popular OG strains?

Northern Lights and Gorilla Glue are two of the most popular OG strains around. Northern Lights is known for its pleasant effects and long-lasting high, while Gorilla Glue is the poster strain of couch lock strains. But don’t let popularity decide what the most potent strain is. Instead, try to grow it yourself. You can get a more potent couch-lock feeling from any indica or indica hybrid by harvesting at the right time. And when it comes to getting that strong couch-lock effect from indica cannabis, it’s all about harvesting late.

0 comments on “The Best Couch Lock Strains For Home Growers”