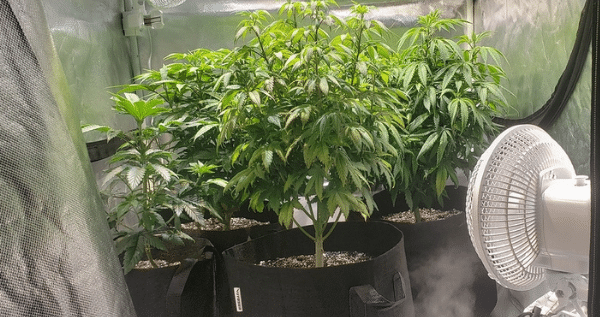 Pruning your marijuana plants can have some advantages in certain cases, but it’s not necessary. In fact, it can even damage the plant and lower your yield. If I were you, I wouldn’t prune my plants at all if I just started growing.

A marijuana plant needs to produce a lot of sugars in order to grow properly. The plant does this by converting light, water and CO2 into sugars and oxygen. Buds, young leaves and side shoots use a lot of sugars, because they grow quickly. The large, fully grown leaves produce these sugars. It would therefore be unwise to prune these big leaves, because your plants will no longer be able to produce as much sugars.

Even leaves in the shade produce sugars. And once a leaf uses more sugars than it produces, the plant automatically gets rid of it. The major advantage of the plant doing this over pruning is that there won’t be a wound. This automatically means a smaller chance of infections and less energy wasted on healing a wound.

How to prune marijuana plants

Cut two-thirds off latest shoot
A shoot grows into 2 new petioles with leave on them. The middle of the shoot contains a new shoot, and new shoots will be formed in the axils. A shoot therefore consists of 2×2 leaves, crosswise against each other. By removing two-thirds, you only cut off the leaves, and leave the stems. These will, along with the shoots in the axils, grow to become the main buds. So you’ll get 4 main buds.

Week 2 growth up to and including week 2 flowering
You can start thinking about pruning in the second week of the growing stage. Your plant will have a number of internodes, and you can already see a bit how it’s going to develop itself. I would wait another week if you have Indicas, because they grow a bit slower than Sativas.

Since your plants will keep growing up to the third week of flowering, you can prune up to the second week of flowering. Your plants always need a couple of days to recover after a pruning session, and it’s possible that they stop growing for a bit, because all energy is focused on recovery. It’s therefore better to not prune during the flowering phase, since all energy should be going to the buds.

Removing the side shoots
From the moment you start pruning, you remove about a quarter of the new side shoots every week. Leave older leaves and stems, because these produce a lot of sugars. And make sure you keep enough fully grown leaves to produce sugars and to prevent light being lost by falling to the ground.

Shears
Use sharp and sterile pruning shears. You create an open wound when cutting off a shoot, making it possible for fungi and bacteria to enter the plant. The plant will however immediately start the recovery process, so if your shears are sterile, there’s no problem. Also make sure that you prune close to the stem, so no new side shoots can form out of the pruned stem.

If your plants aren’t flowering yet and you prune some large stems, try to make little cuttings. Creating cuttings is a fun process that gives you a good feel for your plants. And since it’s an identical copy from the mother plant, you can keep your most successful plants alive forever.

Let my free marijuana grow bible be your ultimate guide as you begin your marijuana journey.

I believe that pruning young leaves or young side shoots could lead to a more favorable distribution of sugars, and therefore a higher yield. Especially the little buds at the bottom of the plant are useless. If you dry them, you’ll end up with no yield and they’ll never be as ripe as the bigger buds. But they do require energy, which is a waste.

If this is your first or second time growing, I wouldn’t prune just yet. It’s better to first see what a fully grown plant looks like and what I mean when I’m talking about those buds at the bottom. If you’ve already had a number of successful harvests, you could start by pruning a couple of plants, but don’t prune them all. Just see how a plant reacts to pruning and compare the final results with the plants that weren’t pruned.

Pruning is something you do intuitively, so it takes a while before you master this technique. Good luck!