Skip to content
Home › Marijuana Grow Course › Plant Biology › What is photosynthesis and its role for cannabis plants? 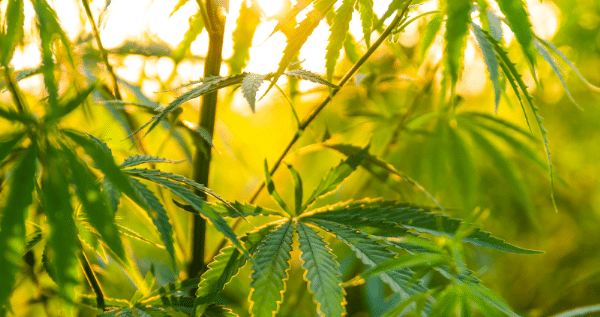 It is essential for every marijuana grower to have a good understanding of the process of photosynthesis, because it’s the basis of all growth.

If something goes wrong with photosynthesis, other processes inside the plant will also not function optimally.

This is because a plant creates its own food through photosynthesis, which is something humans and animals can’t do.

Plants are capable of capturing the radiation energy of the sun in the form of simple molecules, in order to create complex ones.

So plants are able to produce their own organic substances from inorganic (non-living) substances.

They use only water, CO2 and solar energy to create the substances they’re made out of. Only certain bacteria and algae can do the same thing.

All other life on earth is incapable of this and is therefore dependent on what plants produce.

The process in which carbon dioxide and water is converted, under the influence of light, into sugars and oxygen is called photosynthesis, or assimilation.

In photosynthesis, only sugars are produced and numerous other processes convert these sugars into cellulose, fats, proteins and many other organic substances a plant needs in order to be able to grow.

Marijuana plants are actually a sort of tiny chemical factories, because photosynthesis is a complicated structure of chemical processes. Generally, two steps can be distinguished:

1. The plant catches solar energy in temporary storage substances.
2. The bonding of carbon dioxide (CO2) from the air with water.

This process takes place in the chlorophyll and the plant uses the energy stored earlier for this. Eventually there will be simple sugars and oxygen.

The energy caught from the sun is used to create sugars. The energy of the sun remains stored in the bonding of the sugars and can be released at a later time through respiration.

Sugars have a high energy content and can be stored by the plant, used as building materials or used in respiration.

When a plant stores the sugars as reserve food, they are converted to starch.

Starch is nothing more than a series of sugar molecules. The advantage of starch is that it doesn’t attract water (low osmotic value) and can therefore be easily stored.

A part of the sugars instantly goes to other locations inside the plant.

These are used in various processes, mainly as building blocks for other substances and as energy source during respiration.

The plant converts the radiant energy of the sun into chemical energy.

Chemical energy is the energy that’s captured in molecules. Each bonding between atoms has a certain energy value.

The bigger the molecule, the more atoms are bonded and the more energy is stored within.

Photosynthesis is carried out by the plant through two ‘photosystems’ that take place in the chlorophyll.

The two photosystems are the light reaction and dark reaction.

When light hits the chlorophyll and there’s sufficient water and CO2 present, the light reaction can take place.

The chlorophyll contains a thylakoid, a stack of flat membranes with space in between them. It looks a bit like a stack of coins.

The thylakoid hold big proteins on the membranes. These proteins can capture solar energy and thereby put electrons in a higher energetic state.

So there is more energy in this electron than usual, but since this is instable, the energy is quickly passed on to other systems.

Electrons are very tiny negatively charged particles that are usually part of an atom.

The flow in an electricity cable from the minus to the plus pole is also formed by electrons. In case of photosynthesis, the electrons are released from water molecules.

This also releases two hydrogen atoms, and oxygen is produced as a waste product.

The electrons in an excited energy state give off their energy through a transportation chain and this energy is used to transport hydrogen atoms from one side of the membrane to the other.

One side of the membrane of the thylakoid therefore has many more hydrogen atoms than the other side.

This difference enables another molecule, the so-called ATP synthase, to generate energy in the membrane.

The product is ATP, a small energy-rich molecule.

Another reaction takes place inside another big molecule in the thylakoid; an electron is once again brought into an excited energy state by solar energy and is captured by a molecule called NADPH.

Eventually, the result of the light reaction is two energy-rich molecules, ATP and NADPH.

Once the solar energy is chemically stored in ATP and NADPH, the second part of photosynthesis can take place.

This is the bonding of carbon dioxide from the air to sugars. No light is required for this, so it can take place in the dark and in the light.

Then, sugar is formed from the captured CO2 and water. This occurs in a series of processes called the Calvin cycle.

The energy stored in ATP and NADPH is used during the dark reaction.

If there was an award for the most crucial enzyme on the planet, rubisco would definitely be a nominee. CO2 is converted to sugars under the influence of rubisco.

Because of its central role in photosynthesis, the major part of biomass on earth passed this enzyme at one point.

Oddly enough, rubisco is far from perfect, and it even has a major design flaw, which caused some types of plants to create an entirely different way to use rubisco.

Even with its disadvantages, rubisco is the best candidate to make photosynthesis run smoothly.

The big design flaw of rubisco is that it doesn’t differentiate between O2 (oxygen) and CO2 (carbon dioxide).

CO2 has to be captured for photosynthesis and needs to be converted to sugars along with water. If there’s sufficient CO2 and little oxygen, this runs perfectly.

But if there’s a lot of oxygen present and not enough CO2, the rubisco will simply start the reverse reaction, and it will use the oxygen and the sugars to create CO2 and water again.

This is called photorespiration and is very harmful to a plant.

The plant not only breaks down the sugars without useful end products, but also a large amount of energy in the form of heat is released.

This damages the plant, which is why it’s very important that the leaves of the plant have enough CO2, so rubisco will bond with CO2 instead of with oxygen.

The grower can play a role in the efficient operation of rubisco.

Use of rubisco in different types of plants

There are plants that are highly affected by the design flaw in rubisco and therefore evolved a way to prevent photorespiration.

There are three types of plants when looking at their way of photosynthesis: C3, C4 and CAM plants.

Plants in dry and warm areas have a large chance of photorespiration through rubisco.

The plant tries to retain water because of the drought, but that prevents the plant from absorbing CO2 and forces rubisco to move from using CO2 to oxygen.

Many plants that grow in dry and warm circumstances therefore developed a different system.

Instead of instantly letting the reactions take place, they first create a molecule as storage substance.

The CO2 is first stored in a molecule with 4 C atoms, without the help of rubisco; that’s why they’re called C4 plants.

This is contrary to C3 plants, which do use rubisco during the first step, creating a molecule with 3 C atoms as a final product.

The C4 bond is transported deeper into the leaf to special cells located around the vascular bundles.

The CO2 is released there and the regular processes of photosynthesis with the help of rubisco take place.

Since these cells are located deeply inside the leaf, where little oxygen is present, there’s much less competition between carbon dioxide and oxygen to form a bond with the rubisco enzyme.

These plants are also much more efficient at high temperatures and much exposure to light.

The C3 plants have an advantage at lower temperatures, since an additional step in photosynthesis costs extra energy.

Cannabis is a C3 plant: sensitive to photorespiration in cases of drought and heat, but most efficiently under the right circumstances.

The circumstances the grower exposes the plants to are therefore crucial for the success of the weed plants.

You can read more about the perfect circumstances in the articles on climate.

When a leaf catches light, a lot more happens than just photosynthesis.

You can make use of this and see what processes take place inside a plant.

Solar energy puts electrons in two photosystems in the chlorophyll into a higher energy state. Three things can happen after this:

A lot of fluorescence indicates that things aren’t running optimally, because as a grower you obviously prefer as much photosynthesis as possible.

Fluorescence can be measured with a sensor. You can indirectly measure the degree of photosynthesis this way.

The more fluorescence, the less photosynthesis. This equipment is however very expensive and not for small home growers.

What happens with photosynthesis if…?

Enough about theory, let’s go straight into practice with our favourite plant. What happens to the photosynthesis in a weed plant if…

Download my free Grow Bible to learn more about trichomes and other ways to know if your cannabis plants are thriving well.

If the plant doesn’t get enough light, it means that less photosynthesis will take place, because it can’t catch as much energy to convert CO2 to sugars.

It would make more sugars if there was more light, so it could grow faster.

It would be a shame to have a plant that doesn’t grow as quickly as its maximum capacity. It has little effect on the rest of the plant.

If the plant doesn’t get enough water, it will perform poorly.

The plant tries to save the little water it still has by closing the stomata, so CO2 can no longer be caught by the leaves.

The photosynthesis will come to a halt after a short time.

And thanks to the design flaw in rubisco, the plant could even start photo respiration, which leads to a loss of sugars, no growth and damage to the plant.

It’s not a disaster if it’s very warm, as long as the plant has enough water. The plant will just absorb and evaporate more water to cool itself.

Photosynthesis will take place as usual. However, if it gets really warm, the plant can no longer absorb sufficient water at the roots to make up for the evaporation in the leaves.

In this case, the stomata in the leaves will be closed to save water, creating the same problem as is the case with not enough water.

2 comments on “What is photosynthesis and its role for cannabis plants?”